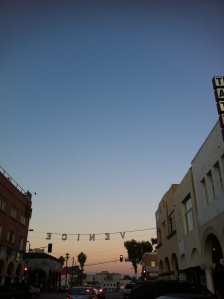 So this is the olive branch instalment – there’s about a week missing and the writing’s sloppy, but you’ll take what you’re given:

LA Day 1– Caught the bus from Hollywood to Santa Monica Pier, then walked from there toVenice Beach. I was prepared for hippies/druggies/transvestites, but not for all of the guys hanging round in their jox – just sauntering about in y-fronts like it was completely normal.

My thinking is that you almost have to be more mental wearing jox around in public than going nude, because if you’re wearing jox, you’re sane enough to know that wearing nothing would be insane, yet you continue to walk around with three quarters of your clothes missing.

What else – not one rollerblader in sight, some of the worst art I have ever seen, and a sickly cloying smell of strawberry, pot and incense that followed me round for the rest of the day. Check out that sunset though – that’s a bit of alright.

LA 2 – Total tourist day. Did the Hollywood sign, Rodeo Drive, Walk of fame etc. The highlight was going to Kodak theatre in a reallyquiet part of the day with only about three other people, and getting to watch Cirque de Soleil rehearse in the main awards room.

LA 2.5 – Groundhog day. We were initially shipped to OrangeCounty, and then when A-Joyce announced we’d be getting a budget rather than set accommodation, I relocated to downtown LA cos I was getting cabin fever. There’s enough material in these five days to start another blog, but I just want to wrap this bad boy up.

Quick review of the in-flight entertainment in my travels:

I am one of the few people in the world that hasn’t read this book, so I can’t say whether or not it was faithful to the original, but it worked on its own. Has one of the best villains in movie history.

It’s like Aesop is hitting you over the head with a sledgehammer. This is a thinly-veiled cautionary tale about humans mistreating apes, other animals, humans, the planet etc. The monkeys aren’t running the world yet, but they might have been directing this movie.

I feel bad for saying this because I really like Cate Blanchett and that creepy kid from Atonement, but I couldn’t be bothered with this. I don’t know whether that means that my attention span has been stunted in the US, or there’s something intrinsically wrong with the film, but either way I tuned out.

So, I lost the biography on T.S. Elliot from City Lights, and then I lost the book that I got to replace that book, but M.H. Abram’s “A Glossary of Literary Terms” made it home. Naturally. The only reason I packed this book was because I didn’t read one page of it at uni and I’ve felt guilty ever since. I tried – I really did, but look what I was dealing with:

In post-structural criticism, what is called “theory” has come to be fore-grounded, so that many critics have felt it incumbent to theorise their individual position and practices. The nature of theory, however, is conceived in a new and very inclusive way; for the word theory, standing without qualification, often designates an account of the general condition of signification that determine meaning and interpretation in all domains of human action, production, and intellection.

Good. Now only my real friends are still reading – thanks for tuning in peeps. It’s been real.

2 thoughts on “Someone wise once said to me – ‘hey, your blog is ridiculously brilliant – why don’t you do another one.’”