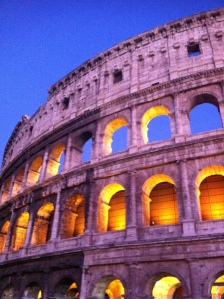 I hope that dear girl made it to Rome – I can’t imagine what the beds must have been like in second class, because I was in the best they had, and it was pretty bad.

I was sharing with five other oldies but goodies, and they were so excited to get a whiff of my youth that I was treated like royalty. They fed me sweets from Lebanon and laughed at all my jokes and opened the door for me when I locked myself in.

Ok, so the outside of the train had never been washed, although it got progressively LESS dirty when you got to the first class cabins – like they could only afford to take half of it through the car wash. The inside smelt like wee, also inoffensive, but less so than the orient express. One dorm the size of half our laundry was our sleeping chambers and it was too bad if half of you wanted to sleep and the others to stay awake because the beds folded down in a way that made it impossible for one person to have a bed and vice versa.

Those oldies knew how to party though – I was the first one to call it quits, but being the demi-god I was, they soon followed. I felt bad because their backs must have been killing and they’d obviously had their hopes set on FIRST CLASS.

We woke up a little sorer and a little wiser – fly next time – and I mimed goodbye to my new franco-italian friends, and they mimed back that they loved me and wished me only the best in life, and then I was off into the great unknown.

First on my hit list was the Colosseum – I’ve got a strategy now. I hit up the big sights and be a total bad bad tourist for a day which is, in a way, the worst day, because it’s exhausting, but THEN, the next day whenever I see someone with a big map and sensible shoes, I say, ah, bella, letta me show you my Rrrroma and send them on their way, eyes glistening with appreciation.

The Colosseum is totally overrated – very poorly constructed, crumbling already and the top is missing, but the rest of the architecture in Rrroma looks sturdy. Everything is so old – it’s crazy. The other places I’ve been to have had really old buildings, but this place feels – probably because it is – truly ancient. There was a man outside the Colosseum asking people if they wanted their photo taken with him – he had a sword and was waving it desperately in the air and then looking fiercely into the eyes of an imaginary beast. Nero would have thrown him to the lions immediately.

The hostel is again top class and bottom price. The reviews I’ve read on these places have all been really accurate – if anything, they’ve given them a lower rating than they should. This is clean and central – 5 mins walk to the Colosseum, and the owners are very helpful. You can’t ask for much more.

Except the Pope tucking you in – that’d be pretty cool.