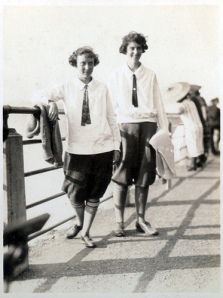 So the brother of a friend of mine – ok, some guy I know – enjoys walking past girls wearing those sheer black stockings posing as pants and mumbling “not pants” as he passes them. While his work in the field is commendable, given the time difference and the mumbling it probably reaches them as “hot pants,” thereby bolstering their self-esteem and encouraging further acts of public nudity.

Now, while I find the stockings aesthetically suspect, my real problem is with those really, really short shorts. I may be out of touch with today’s youth, but they look like a belt until you think how odd it is to see someone with a belt on and no pants to pull up.

I’ve a mind to do something about it soon. To be a kind of Major morality, sailing the high seas of modesty and taking no prisoners. It goes a little something like this:

Channelling the acting chops that, (much to the chagrin of my classmates), won me the coveted lead role of Rockin’ Robin in the grade two musical, I sidle up to an offender and whisper loudly – “you’ve got no pants on. I’m so sorry. Now, what we’re going to do is…”

Girl swivels round to identify her sartorial saviour.

“Look ahead, look ahead! For goodness sake child. You’ve got a lot of chutzpah for someone that’s not wearing any pants. Just follow my lead, alright.”

“Hi!” I say to an old lady wandering by. “Nothing to see here. Just me and a scantily-clad friend shooting the breeze.”

“Now listen here,” I say, “I’m losing my patience Von Teese, so from hereon out you do exactly as I say. When I say jump you say, how high.”

“Not now you fool – you’ve no pants on your person. If anything it should be how low.”

“But how can I be sure no one will see me,” says the little scamp, tears welling in her heavily lined eyes.

Captain chastity is not without compassion and I say, “there there,” trying to find a covered piece of skin to pat.

We do a form of Charleston to the closest toilet, me nudging her in the back – “keep smiling, keep smiling.”

Delivered to safety with as minimal an amount of gawking as one can hope for in the absence of clothing, this modern-day Delilah throws her arms around me saying, “how will I EVER repay you.”

I say, “forget about it kid, but do me a favour – remember to wear shorts next time.”

Off I wander, waving aside a fellow shopper’s pen and paper. “No one’s going to sell my signature on Ebay except me, sweetheart,” I say as I smooth down my cape.

A relative, no doubt.

5 thoughts on “Maybe they were on to something.”